Your parents have been living quite well in their own home for decades now. But if you’re thinking it might be time to step in and give their home a fall-prevention assessment, you’re right.

Today, Americans are living longer while staying active and healthy. But adults 65 and older are at risk for falls, which can signal the beginning of the end of that active life – and their independence. Injuries from falls can lead to limited activity, reduced mobility, loss of fitness and a fear of falling, all of which increase risk of additional injury.

Falls also are the leading cause of injury-related death for adults age 65 and older, according to Injury Facts 2017, the statistical report on unintentional injuries created by the National Safety Council. This is not surprising considering falls are among the most common causes of traumatic brain injury. More than 33,000 people died from falls in 2015, and the vast majority of them were over age 65.

According to the Centers for Disease Control and Prevention:

Falls are preventable and aging, itself, does not cause falls.

Some of the underlying causes of older-adult falls, such as muscle weakness, medications that cause dizziness, improper footwear, impaired vision, slick floors, poor lighting, loose rugs, clutter and uneven surfaces, can be improved.

While falls can happen anywhere, they most often occur at home. What can you do to make your home or the home of someone you love safer? 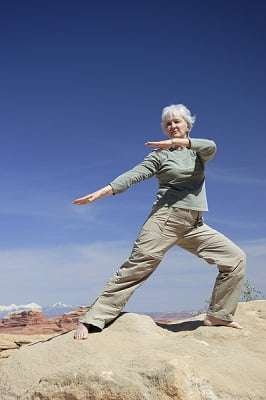 May is Older Adult Month

Harvard Medical School touts the value of exercise in preventing falls and even reversing some of the many conditions associated with aging. Tai Chi, in particular, earned a spot in a Harvard Health publication. The ancient Chinese mind-body practice improves balance and muscle tone, and could be “the perfect activity for the rest of your life,” according to the article. Even people in wheelchairs can do it.

PubMed.gov also conducted a six-month trial to determine the effect of Tai Chi on older adults. During the trial, inactive older adults who did Tai Chi three times a week decreased the risk of falls by 55 percent compared to a control group.

In addition to regular exercise, older adults should ask a doctor if their medications may be causing dizziness, and make sure to have regular eye exams.

It’s Because You Love Them

The role reversal involved with taking care of an aging parent can be challenging; not every parent wants their child’s advice or help in making their home safe. But as we celebrate Older Americans Month in May, let them know how much you love and value them and want them to be safe. They might even discover life can be a lot easier with the proper precautions in place.

Living independently as long as possible: why it matters.
March 19, 2020

Why Home Healthcare is Replacing Traditional Nursing Services and What it Means for Seniors.
July 30, 2019

The Future of Healthcare Resides in Your Home.
June 9, 2018
Go to Top
Go to mobile version