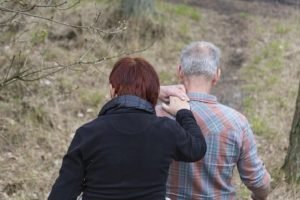 Who is caring for the caregivers?

There are nearly 40 million American adult children who have been pressed into service as primary caregivers for prior generations of parents.  This volunteer army is put at great financial risk because family caregivers are generally unpaid, but the economic value of their care is estimated at $470 billion a year — roughly the annual American spending on Medicaid.

About sixty percent of those caring for older family members report having to reduce the number of hours they work, take a leave of absence or make other career changes. Half say they’ve gotten into work late or had to leave early. One in five report significant financial strain. Family caregivers over 50 who leave the work force lose, on average, more than $300,000 in wages and benefits over their lifetimes.

Also, the profile of the family caregiver in America is changing as the population ages, according to a new research study from the National Alliance for Caregiving and AARP. While the “typical” family caregiver is a 49-year-old woman who takes care of a relative, caregivers on the whole are becoming as diverse as the American population.

Nearly a quarter of caregivers are now millennials and are equally likely to be male or female. About one-third of caregivers have a full-time job, and 25 percent work part time. A third provide more than 21 hours of care per week.

A recent report from the National Academies of Sciences, Engineering and Medicine suggests that society’s reliance on this “work force” — largely taken for granted — is unsustainable. While the demand for caregivers is growing because of longer life expectancies and more complex medical care, the supply is shrinking, a result of declining marriage rates, smaller family sizes and greater geographic separation. In 2015, there were seven potential family caregivers for every person over 80. By 2030, this ratio is expected to be four-to-one, and by 2050, there will be fewer than three potential caregivers for every older American.

“As previous AARP research has shown, we’re facing a caregiving cliff,” said Dr. Susan Reinhard, senior vice president and director, AARP Public Policy Institute; and chief strategist, Center to Champion Nursing in America. “By mid-century, there will be only three family caregivers available for each person requiring care. That means, to avoid putting them at higher risk as they age, we need to provide support for existing caregivers who are underserved by the current long-term services and support system.”

Living independently as long as possible: why it matters.
March 19, 2020

Why Home Healthcare is Replacing Traditional Nursing Services and What it Means for Seniors.
July 30, 2019

The Future of Healthcare Resides in Your Home.
June 9, 2018
Go to Top
Go to mobile version